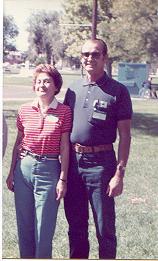 De Lores Wanner was the most extraordinary researcher of her era.   She had the uncanny ability to find and get copies of the original sources of the information she was interested in.  She even in January, 1986 purchased 5 rolls of microfilm from the Summit County, Ohio Court House.  She said, “I wrote to them so often they said they had the following:  Original Wills, Estates, Births, Deaths and Marriages from 1800-1905 on microfilm and I could buy them if I wanted.”

De Lores always typed her letters and they were very easy and clear to follow.  She analyzed all of her sources to compare discrepancies and made conclusions that were fully explained in her letters.  Most, if not all, of her conclusions still hold true today.  She wrote to many Sherbondy descendants directly and helped them with many ancestor questions.  In one letter, she identified Ellen Sherbondy (Clan D) as a daughter-in-law of abolitionist John Brown.

De Lores was a descendant of Clan D and was an expert on the Ohio Clans; Clans A, B and D.   She was a daughter of Myrtle Ruth Sherbondy and John Leland Caskey.  She had been “researching the Sherbondys of Ohio and Pennsylvania for some time” before her contact with Jeff Sherbondy and Dorothy Hiatt in 1982.  De Lores and her husband Leonard attended the reunion in Ontario, OR in Sept, 1984.