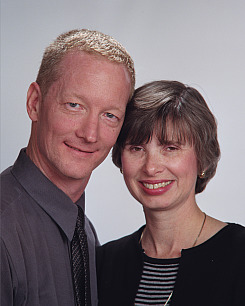 Jeffrey D. Sherbondy was born in 1959 in Omaha, Neb.  He grew up in Omaha, where all of his grandparents and many of his aunts, uncles and cousins also lived.  In 1973, his family moved to De Moines, Iowa and in 1975 they moved to Wichita, Kansas.  Jeff graduated from Wichita State University in 1981 and started work with a big five accounting firm in Kansas City.  He earned his CPA in 1982.

In 1984, he joined Rival Manufacturing Company (makers of “Crock Pot” and other kitchen appliances) where he progressed from Chief Accountant to Controller over his 16 year career with them.  In 2000, Jeff joined Seaboard Corporation, an international agribusiness company as Controller of one of the divisions. His passion for accounting, automation and attention to detail are a few factors that have helped him succeed in his career.  He retired from Seaboard in 2018.

In 1987, Jeff married Karen Christie whom he met at church and had known for several years.    They have a daughter and a son.  One of Jeff’s favorite family activities over the years has been the family vacation, which has taken them to all areas of the United States.  Jeff enjoys water activities for sports and recreation and snow skiing.  He swims and practices yoga for fitness.

Jeff began researching Sherbondy’s in 1976 when he was 17 after hearing stories of his ancestry (the Legend story) told to him by his grandmother.   He talked to many relatives and wrote many letters gathering information about distant cousins.  He started learning about all descendants of John Sherbondy.  He began the SFA and published some newsletters until about 1987.  After he began publishing Sherbondy ancestry information, he was sent hundreds and hundreds of additional documents and letters about our ancestors.

This web site is the result of the computerization of his records.  However, it only has about 10% of the information in the SFA archives.  His passion for genealogy is to collect, organize, market and publish information on Sherbondy descendants.  He believes that he has been given this interest in genealogy,  computer skills and attention to detail to fill a need in bringing together all Sherbondy descendants.  His next plan for the Sherbondy genealogy is to publish a series of books.