In approximately 1816, Melcher Sherbondy assisted his son John (Clan A) in purchasing about 368 acres on a hill in Summit County, OH.  In 1817, the families of John and George (Clan B) Sherbondy moved there.  In about 1828-1830, Melcher and his wife and their son Peter’s family (Clan D) also moved there.  This area became well known as Sherbondy Hill! 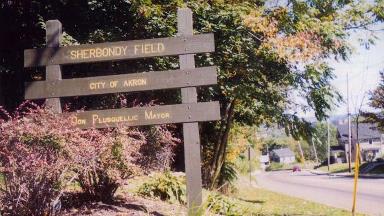 Sherbondy Hill was a real place and not just an imaginary invention of our storyteller ancestors. It was a part of Akron, Ohio. Sherbondys were among the very first ten families that settled Akron and they made their mark on Akron history. John and George Sherbondy were early trustees of Portage Township: John was also Assessor and George was the Director of the Infirmary. Their brother Peter and sister Rosannah also settled there. Sherbondy descendants were inventors of a pneumatic tire and cofounders of the Diamond Rubber Company.

In the early days of cars, Sherbondy Hill was famous locally. My uncle Bill Sherbondy wrote in a letter about when he drove to Akron in search of Sherbondy Hill. He stopped at a gas station to ask where it was and the attendant told him he was on it! He related that people used to test their skills driving up it.

Dawne Crotts told me that the house on Sherbondy Hill was at the top of the hill. It was given to the city by the Sherbondys to be a school. Ex-Sheriff Samuel A. Lane writing about the early school in Akron, stated that there were several separate school districts including “the Sherbondy neighborhood.”

The school was also used as a church later. The Sherbondy Hill Church of Christ was organized on 1 February 1891 and as of July 1891 there were 21 members and 100 Sunday School scholars, under the leadership of Rev. Wellington Besaw.

If you enlarge to 200% and look at block 18 at the bottom you will see a concentration of Sherbondys.