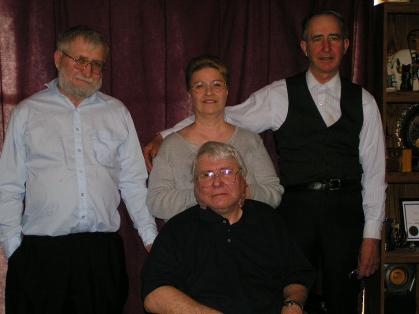 Monte D. Milburn was the most thorough Sherbondy researcher.   He followed up on each and every lead that he received.  He always enclosed a self-addressed, stamped envelope with every request he sent.  He would not hesitate to request the same item time after time.  He also repeated his requests in different ways in each letter to make sure he was clear to the reader.  Each time he received a new lead for a county or city, he would write more letters to every court house, library, or genealogical society for that location.  It is absolutely amazing the volume of documents and information that he received, most times for only the cost of postage!

Monte was able to find information and documents on the descendants of Abraham Sherbondy (ancestor of Clan L) which no other descendants before or since have been able to do.  A record of the first marriage of George Sherbondy (#1251) to Margaret Bell (with a daughter b. 1842-1843) is one example.  Another example is a copy of the “Family Record” written by Rachel Catherine Sherbondy Howard prior to 1941 with information on Abraham and his children.  Monte got a copy of this from Eileen Howard Dietz.  You can see the copy on the Sherbondy Biographies Page.  Abraham had 4 sons; George, Richard, John and Abraham.  Because of Abraham’s frequent moves across the country, Monte’s research encompassed many areas, including the following:  Mifflin County and Allegheny County, PA, Allen County and Kosciusko County, IN and Mitchell County, KS.

Monte is a descendant of the Richard branch of the Abraham Sherbondy Clan (Clan L.).  He currently lives in Beloit, KS. He lived most of his life with his brother on a farm in Lincoln County, Kansas.  This farm is the same farm that he was raised on and that his father lived on all of his life.  This is the farm that was purchased by his grandparents, Lewis Burke Thompson and Alice May Sherbondy, daughter of Richard Copeland and Lovina Sherbondy.