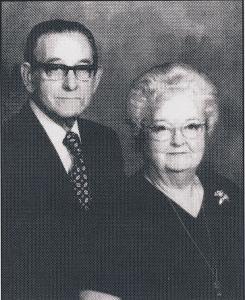 Any genealogy of Sherbondys and Reagans in Westmoreland County would not be complete without acknowledgement of the work of Della Reagan Fisher.  She was a Pioneer at a time when genealogy was not popular.  She wrote to relatives, extracted information from Court Houses, scoured cemetery records, transcribed documents from old records and documented everything on hundreds of typed pages.   This was, of course before computers!

Della owned a beauty shop for many years prior to her retirement.  Her genealogical research was extensive and probably encompassed a lifetime of effort.  She held high offices in many Pennsylvania State genealogical societies and received the highest award for the most records contributed to the State Library.  The SFA did not have direct contact with Della.  However, the results of her work make up a large part of our records.  She was a descendant of Clan C, daughter of William Reagan and Sadie Frye.  She gathered information on all Reagan descendants and thereby included information on the descendants of both Clans C (Catherine Sherbondy Reagan) and Clan E (David and Mary Frances Reagan Sherbondy).  In addition, Martha Reagan married Peter Sherbondy, ancestor of Clan D, and moved to Ohio.  However, their descendants are not included in Della’s records.

Della typed her information and gave copies to several libraries in 1968.  Here is a recap of her work, as it relates to Clans C and E:

When asked why she did genealogy, “Honor thy father and thy mother,” was her answer, then added other reasons:  “Pride in the accomplishments of one’s ancestors, knowledge of kinship with others in the same family, promotion of family reunions, determination of legal heirs to estates, a rewarding hobby, establishment of eligibility for patriotic and other organizations, leaving a record of the past as a guide to future generations, the satisfaction of piercing the curtain of obscurity, solving a problem or riddle, meeting and conquering a challenge.”